Celebrating the Accomplishments of Winston Under 40’s Leadership Awards Recipients

Neil Allerton is a financial advisor with Edward Jones, helping individuals and small businesses develop and implement plans to achieve their financial goals. He is an Eagle Scout and volunteers as a Unit Commissioner for Cub Scout Pack 918 in Pfafftown, as well as volunteering for the Forsyth Humane Society.

Abrea Armstrong is a graduate of St. John’s University and Wake Forest University. Abrea currently works on the marketing & communications team at the Wake Forest Innovation Quarter where she works to develop solutions to be inclusive. She enjoys working with kids — especially to encourage literacy, entrepreneurship and involvement in STEM – and especially with children of color. Abrea is currently working on her first book.

Ashley Banks is a graduate of Duke University and Tulane Law School. At Tulane, Banks was honored with the Tulane 34 Award which honors graduates for their service and leadership. She is a field attorney for the National Labor Relations Board. Her volunteer efforts include roles with the Winston-Salem Urban League Young Professionals, the Junior League of Winston-Salem, Leadership Winston-Salem, and Delta Fine Arts.

Corey Bugno joined the Dash in 2010 and helped open BB&T Ballpark where he recruited and trained game day employees. That customer service model which began with 125 staff grew into its own company, RSES, which Corey helped start in 2013. Today the company employs nearly 1,600 individuals across 10 properties including Wake Forest, Clemson, Virginia Tech, WVU and NC A&T. Corey established the Diamond in the Rough Program in 2014 to expand the access of youth to baseball and softball. The program has rebuilt 5 local fields and given over $110,000 since its inception to local youth to grow the game of baseball.

Joshua Canzona has a PhD in Theological and Religious Studies from Georgetown University. His academic work is focused on the study of Islamic and Christian mysticism. He serves as the University Ombuds at UNCSA where he offers problem solving and conflict mediation services to the faculty and staff. He is also Assistant Dean of Academic Affairs at Wake Forest University. Josh serves on the Community Agency Allocation Committee for the City of Winston-Salem and is a grant reviewer for the Winston-Salem Foundation.

Ashley Carroll Hooker has over 15 years of experience in retail and commercial design with a strong background in space planning & project management. She has a heart to serve the community by connecting people and impacting positive change through design development. She serves as a women’s ministry leader at her church.

Alex Collins is National Sales Manager for Visit Winston-Salem and considers it an honor to introduce people to all that Winston-Salem has to offer. Alex is the Chair of the Winston Under 40 Advisory Board and serves on the Board of Trustees and the Strategic Planning Committee at Calvary Moravian Church.

McNeil Cronin is Vice President of Piedmont Triad Anesthesia and has also been selected to serve as Medical Director of Hawthorne Surgical Center. He has been named Chair of Piedmont Triad Anesthesia’s Political Action Committee and serves as President Elect of the North Carolina Society of Anesthesiologists. One of McNeil’s greatest accomplishments and passions is serving as the President and Board Chair of the Down syndrome Association of Greater Winston-Salem.  In his three years as president, the organization has grown tremendously and is the leading voice in Winston-Salem for inclusion of those with intellectual disabilities.

Nick Gonzalez is a partner and broker at Linville Team Partners. He has been active in real estate in the Triad since 2010 and was the Triad’s #1 broker in retail sales in 2019. He believes in a relationship-driven approach to business, with a team-based attitude. Coming to Winston-Salem in 2006 by way of Miami, FL, and Barcelona, Spain, Nick studied film producing at UNC School of the Arts and successfully produced a feature-length film in 2016.

Katie Hall is a communications professional with experience at organizations including IFB Solutions, Bethesda Center for the Homeless, and more. She currently serves as Business Development Manager at Vela Agency. An alumna of Salem College, Katie has taken an active role in alumnae efforts to help reenergize Salem College’s strategic direction and fundraise $14M for the Step Up for Salem campaign. Katie is also a graduate of Wake Forest University’s Master of Business Administration (MBA) program, where she served as Ambassador for the School of Business and co-chaired the Women of Wake group dedicated to connecting female MBA students with opportunities to network and support one another. She also serves on the Winston-Salem Local Governance Study Commission.

Joseph Hamby has a Bachelor’s degree in Communications/Public Relations from Gardner-Webb University and a Master’s degree in Organizational Leadership from Liberty University. He is a business manager at Womble Bond Dickinson where he works to effect positive change and process efficiencies within business operations. An avid pet lover, Joseph co-chairs the Forsyth Humane Society’s Mutt Strut 5k and also serves as a foster parent for their puppies. He actively serves on the Town of Lewisville Planning Board, Winston-Salem Fair Planning Committee, Winston–Salem/Forsyth County Schools Career Academy Board and Winston Under 40 board.

Tiesha Hinton is the Assistant Director for the City of Winston Salem’s Office of Business Inclusion & Advancement. She leads the City’s Minority and Woman-owned Business Enterprise (M/WBE) Program. She obtained her bachelor’s degree from North Carolina A&T State University in Business Management and a Master of Science in Social Administration from Case Western Reserve University.

Rashad Little is a University Program Associate at Winston-Salem State University and a WSSU graduate. He is a dedicated student development professional with growing expertise in the areas of career development and personal development. He is also the creator of a social enterprise experience called Candid Yams Kickback, which uses film to address topics of social justice, mental health and overall wellness in our community. He hopes to help communities evaluate themselves to be better people in engagement practices. Rashad is an active community volunteer, having served for agencies including Habitat for Humanity of Forsyth County, My Brother’s Keeper, and the Winston-Salem Urban League Young Professionals. Rashad was chosen by his classmates to serve as a class connector for Leadership Winston-Salem’s class of 2019.

Sarah Lupton is a filmmaker and world traveler. She launched Shift Creative Agency to share the stories of organizations and brands she has met around the world and influence change. As a documentary producer and writer in New York City, she wrote and produced ESPN’s Let Them Wear Towels, which premiered at the 2013 Tribeca Film Festival. She was senior producer of Ovation TV’s 6-part docu-series, “The Fashion Fund” (2014), and associate producer of Knuckleball! (2012), which aired on Showtime and premiered at the 2012 Tribeca Film Festival. She has worked with clients such as Condé Nast, Google, and A&E. Sarah earned her BA in English with Highest Distinction at Duke University and her MBA at Wake Forest University, where she graduated Beta Gamma Sigma.

Jamie Maier is the Executive Director of the Piedmont Environmental Alliance (PEA), where she develops and oversees the organization’s strategy, administration, and programs. Jamie graduated with a BA in Political Science and Economics from Duke University in 2008 and was awarded the American Jewish World Service World Partners fellowship in 2009, receiving training and funding to support her work at the National Centre for Advocacy Studies in Pune, India. She currently serves on the Board of Directors for Creative Corridors Coalition and on the Advisory Council of Gateway Nature Preserve.

Desiree Partin currently works on regulatory special projects for BB&T, serving as the Senior Audit Manager for AML (Anti-Money Laundering) Technology Transformation. She has participated in multiple BB&T projects at Title I schools and serves as BB&T’s United Way Corporate Campaign Chair, overseeing a campaign goal for 2019 of $1.9M – putting BB&T on track to be one of the top contributors to the Forsyth County campaign.

Vivian Perez Chandler has lived in Winston-Salem since 2002, after her family immigrated to the United States from Guatemala. Vivian graduated from North Forsyth High School in 2009 and was able to apply to the DACA (Deferred Action for Childhood Arrivals) program when it was enacted in 2012, allowing her to begin working at the YMCA of Northwest NC where she found her passion to serve others.Vivian has been recognized for her outstanding contributions to diversity, inclusion, and the community through her work for organizations including the Hispanic League, where she served as Board President for two years, the Kate B. Reynolds Charitable Trust, and WS/FCS. She is the recipient of the Education Latino Diamante Award and the YMCA’s Youth Development Award for North and South Carolina.

Danielle Rose is a graduate of East Carolina University with a Bachelor of Science in Rehabilitation Studies and a dual Master’s of Science in Rehabilitation Counseling and Vocational Evaluation. Danielle managed the Work-Based Learning Program at Forsyth Tech for three years before being selected to coordinate Forsyth Tech’s first apprenticeship program, [email protected] Tech (Learn and Earn Apprenticeship Program). She works with local employers, students, and faculty across dozens of industries to create and manage internship and apprenticeship opportunities.

John Sanders is an associate with Kilpatrick Townsend’s Investment Management & Broker-Dealer Team. He serves public and private investment funds, investment advisers, and organizations raising capital through public or private offerings. A unique part of John’s practice involves leveraging his Italian cultural and language fluency to serve Italian firms operating or selling products in the U.S. and helping U.S. firms do business in Italy. He is also an adjunct law professor at Wake Forest University. John serves as a board member and pro bono legal counsel to the Centers for Exceptional Children, helping them to reach a transformational long-term joint venture agreement with WS/FCS.

Talitha Vickers is an anchor at WXII 12 News where she is passionate about bringing issues to light that impact the community. When not on-air, Talitha serves as a mentor for high-school students, serves on the board for the YMCA of Northwest NC, and remains on-the-go with her twin toddlers in tow. 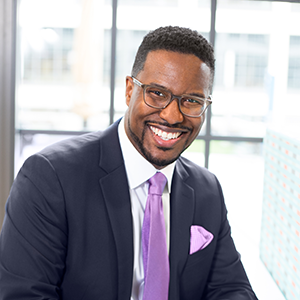 Director of Talent Retention and Recruitment